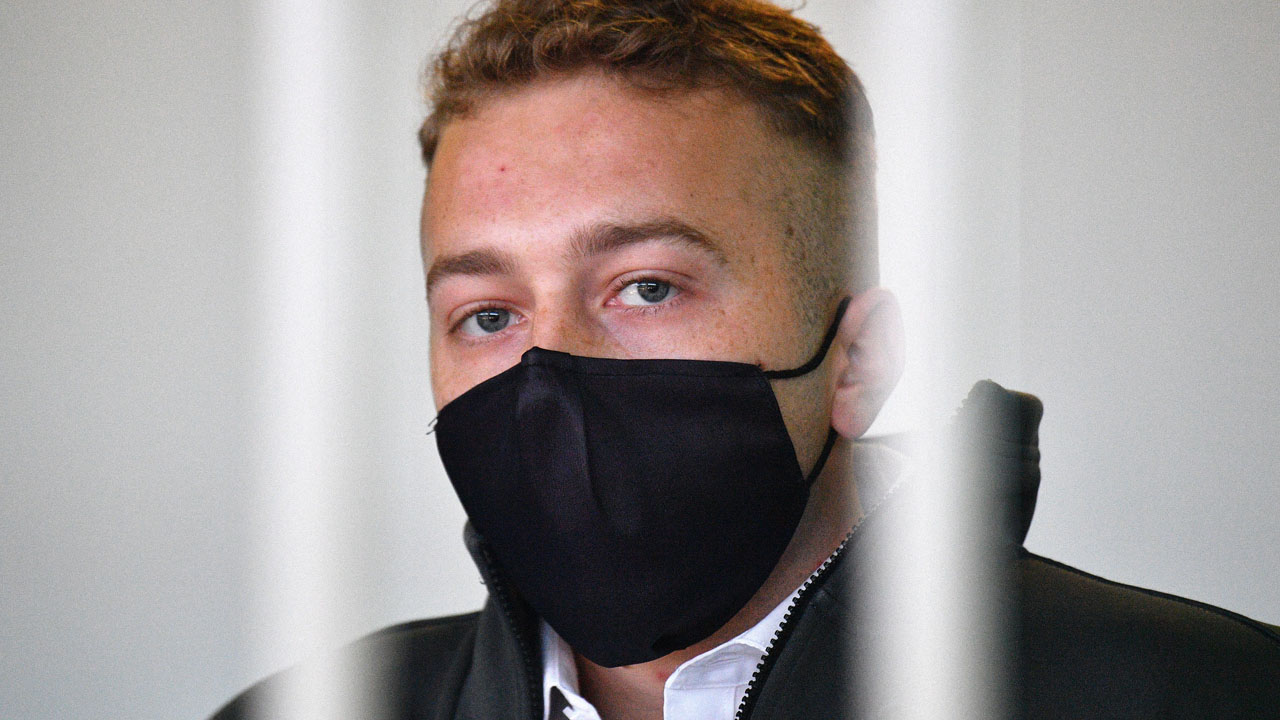 US citizen Finnegan Lee Elder, who is being tried along with another US citizen on murder charges after Carabinieri officer Mario Cerciello Rega was killed in July 2019, looks on as he attends a hearing during their trial in Rome, on May 5, 2021. – Finnegan Lee Elder and Gabriel Natale-Hjorth are on trial over the killing of Italian Carabinieri paramilitary police officer Mario Cerciello Rega, who was in plain clothes when he was slain in a night drug bust on July 26, 2019. The two face life sentences if found guilty of knowingly killing a police officer. (Photo by Tiziana FABI / AFP)

An Italian court convicted two young Americans Wednesday for the murder of a police officer while they were on a summer holiday in Rome, with both handed life sentences.

Finnegan Lee Elder, 21, had admitted stabbing Mario Cerciello Rega during a late-night encounter in July 2019, while out with his friend Gabriel Natale-Hjorth, 20.

Prosecutors cast it as a brutal, unprovoked attack in which Elder, then 19, stabbed Cerciello 11 times with a seven-inch camping knife on a dark street near the Americans’ hotel.

But the defendants claimed self-defence, saying they were jumped from behind by men they thought were thugs following an earlier drug deal gone wrong.

The trial, which lasted more than a year, boiled down to a contest between two diametrically opposed versions of how the attack unfolded, pitting the word of Cerciello’s partner, the central prosecution witness, against that of the young men.

Reading out the verdict, Judge Marina Finiti declared the two guilty of all charges and sentenced them both to life imprisonment — Italy’s stiffest sentence.

Their jail time will also include a two-month period of solitary confinement, and they will have to pay the costs of the trial.

Elder, whose lawyer whispered the sentence to him as it was read in Italian, appeared close to fainting and was rushed out of the courtroom by penitentiary police.

Natale-Hjorth, who did not handle the murder weapon but helped to hide it, faced the same homicide charge under Italian law.

After the verdict was announced, the policeman’s widow, Rosa Maria Esilio, sobbed audibly and hugged his brother.

“It was a long and painful trial,” Esilio said later outside the courtroom through tears. “This won’t bring me back Mario.”

The case, which scandalised Italy while also raising doubts about police conduct, hinged on whether the men from California — who have been in jail since their arrest almost two years ago — knew the officers were police.

They said neither officer showed their badges nor identified themselves as police before the 32-second attack, an account refuted by Cerciello’s partner, Andrea Varriale, 27.

Defence lawyers said they would appeal.

“This sentence is a disgrace for Italy with these judges who don’t want to see what emerged during the trial and the investigation,” Elder’s attorney, Renato Borzone, told reporters.

Police inconsistencies
The death of Cerciello, who had just returned from his honeymoon when he was killed, aroused an outpouring of public sympathy in Italy, and his funeral was broadcast live on television where he was hailed as a hero.

With its verdict after 11 hours of deliberation, the jury appeared to discount a series of blunders and inconsistent statements by police leading up to and after the attack.

Those included Natale-Hjorth’s blindfolding during his police interrogation, a falsified police report and Varriale’s lie that he was armed at the time of the attack.

During closing arguments, the defence sought to show that police failure to follow protocol the night of the attack suggested that Varriale was an unreliable witness.

Elder attorney Roberto Capra challenged the jury to consider whether they could “reject the authoritarian idea that law enforcement can be believed at any cost, that they can say whatsoever and be believed because they belong to the police”.

The case has sparked comparisons with the high-profile trial of Amanda Knox, a US student convicted and later acquitted of a 2007 murder in Italy.

‘Shock and terror’
A confusing web of events led to the altercation in the early hours of the morning in a genteel neighbourhood near the Americans’ four-star hotel, beginning with their search for cocaine.

After an intermediary introduced them to a drug dealer who sold them aspirin instead, the teens stole the bag of the go-between in retaliation, later demanding money and drugs to return it.

The dealer was actually an informant, and after the bag’s theft was reported to police, Cerciello and Varriale showed up at the designated exchange point — where the attack occurred.

Natale-Hjorth, who scuffled with Varriale during the encounter, said he did not know his friend was carrying a knife before the attack, yet helped him hide it afterwards in their hotel room’s ceiling panel.

Elder did not testify during the trial, but in statements made to the court, he apologised for taking Cerciello’s life and said he would never forgive himself. Yet he reiterated his account of the events, describing “shock and terror” at being set upon by a stranger.

“I’ve realised it’s difficult to believe a person in my position. But what I’m telling you today is the truth, just as I spoke the truth at the time,” he said.