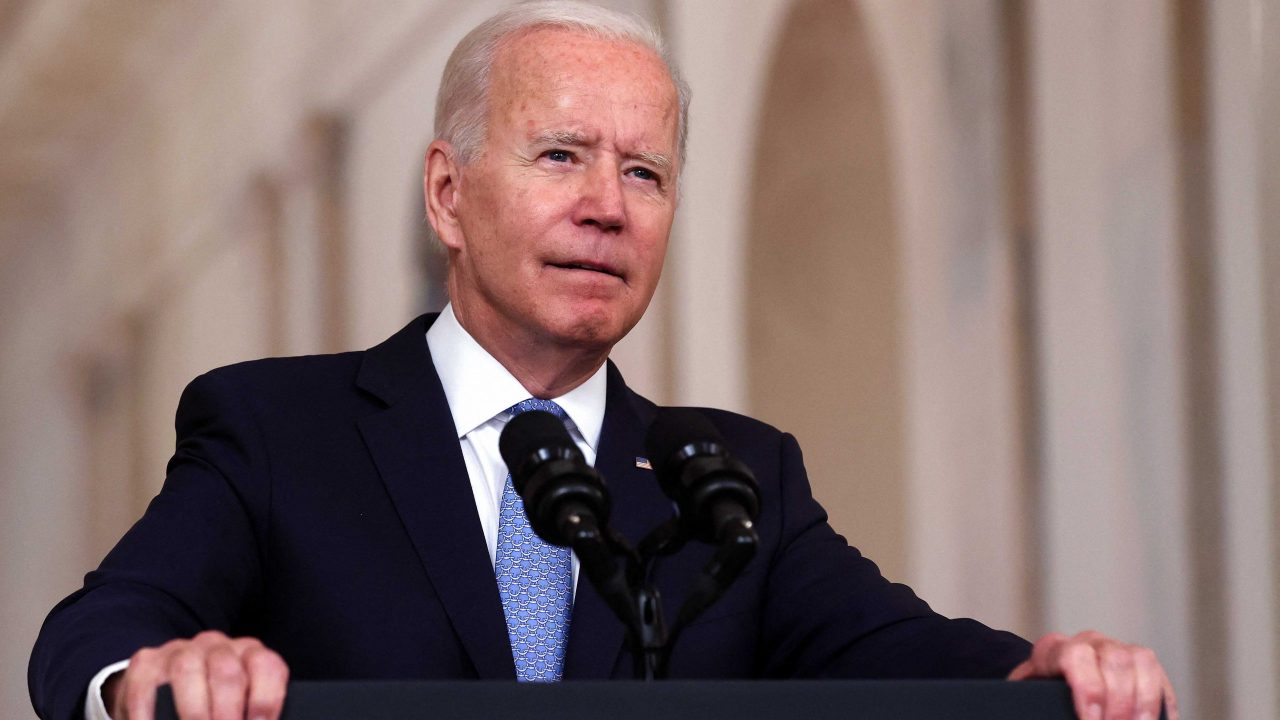 WASHINGTON, DC – AUGUST 31: U.S. President Joe Biden delivers remarks on the end of the war in Afghanistan in the State Dining Room at the White House on August 31, 2021 in Washington, DC. The last American military aircraft took off from Hamid Karzai Airport a few minutes before midnight in Kabul, marking the end of U.S. military presence in Afghanistan since the invasion following the attacks of September 11, 2001. Chip Somodevilla/Getty Images/AFP (Photo by CHIP SOMODEVILLA / GETTY IMAGES NORTH AMERICA / Getty Images via AFP)

President Joe Biden made a forceful defense Tuesday of his “wise” decision to leave Afghanistan, telling Americans he refuses to send another generation to fight in a “forever war.”

The traumatic departure from Afghanistan, completed Monday after 20 years of war against the Taliban, was “a wise decision and the best decision for America,” Biden said in an address to the nation.

After coming under fire from Republican opponents over the chaotic nature of the rush to the exits in Afghanistan, Biden said he did what should have been done years ago.

“I was not going to extend this forever war and I was not extending a forever exit,” he said.

The evacuation, he said, was an “extraordinary success.”

Speaking in the ornate State Dining Room of the White House, Biden thumped the lectern as he detailed the extraordinary costs of a war more than 2,400 US military deaths and up to $2.3 trillion spent that ended with the Taliban guerrillas back in power.

“I take responsibility for the decision,” he said.

“I made a commitment to the American people that I would end this war. Today, I honored that commitment. It was time to be honest,” he said.

“After 20 years in Afghanistan I refused to send another generation of America’s sons and daughters to fight a war.”

Following two weeks of evacuation flights a titanic effort marred by a suicide bombing that killed 13 US service members and scores of Afghans Biden faces a chorus of criticism that could yet hurt him domestically.

Getting out of the last big post-9/11 war was one of Biden’s campaign promises coming into office. The idea was overwhelmingly popular.

But the US departure, culminating with a solitary airplane lifting at midnight from Kabul with the last troops and diplomats, brought home for many that the so-called “drawdown” or “retrograde” really amounted to jarring defeat.

Republicans, led by Biden’s bitter predecessor Donald Trump, paint the exit as a humiliating failure, a defeat that outdoes even the 1975 evacuation from Saigon, and a signal to the world that the United States has given up.

“President Biden just said his disastrous withdrawal from Afghanistan was an ‘extraordinary success,’” the Republican Party in the House of Representatives tweeted.

“Thirteen service members were killed in action. HUNDREDS of Americans were left abandoned. BILLIONS of dollars in U.S. military equipment is now in the hands of the Taliban.”

Biden insisted in his speech that remaining Americans in Afghanistan many of them dual nationals would be allowed by the Taliban to get out if they wanted.

While it is unclear how many Americans were actually prevented from leaving, the issue is a dangerous political issue for Biden.

For those stranded, “there is no deadline. We remain committed to get them out if they want,” he said.

And addressing another rising concern in Washington, he warned IS-K, the hardline Islamist militant group in Afghanistan that killed the 13 US military members, that they would be pursued.

“We are not done with you yet,” he said.

But he also broadened his argument, reaching out to Americans who have long questioned the need for US attempts to attempt nation building in hostile countries.

With the departure from Afghanistan, the United States is “ending an era of major military operations to remake other countries,” he said.

“Human rights will be at the center of our foreign policy but the way to do that is not through endless military deployments.”