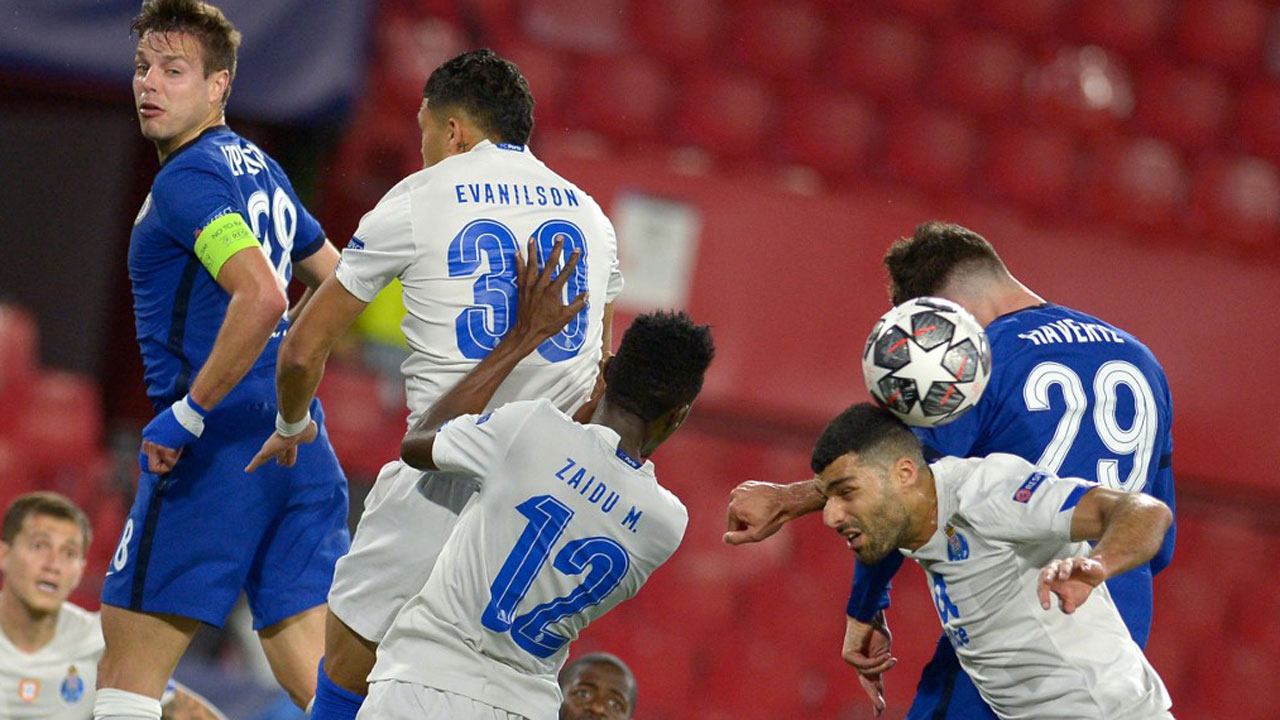 Chelsea reached the Champions League semi-finals for the first time since 2014 despite a 1-0 defeat against Porto in Tuesday’s quarter-final second leg in Seville.

Thomas Tuchel’s side will play Real Madrid or Liverpool for a place in the final after producing a masterclass in game management to win 2-1 on aggregate.

Real travel to Anfield on Wednesday looking to protect a 3-1 lead from the first leg.

They could do worse than copy Tuchel’s tactics as Chelsea smothered Porto with an intelligent defensive approach until Mehdi Taremi’s stunning bicycle kick in the last minute of stoppage-time.

That sublime strike was out of character with the rest of Porto’s display as they laboured to overturn the 2-0 first-leg deficit.

Chelsea have lost only once in 18 matches since Tuchel replaced the sacked Frank Lampard in January and this was another feather in the German’s cap.

Tuchel had admitted this week was a make or break period for Chelsea.

They passed the first test with ease and can now focus on Saturday’s FA Cup semi-final against Premier League leaders Manchester City at Wembley.

The Blues are fifth in the Premier League as they chase a top-four finish, meaning they might need to win the Champions League for the first time since 2012 if they are to qualify for next season’s competition.

Led by the astute Tuchel, who took Paris Saint-Germain to the Champions League final last season, that lofty ambition can’t be ruled out.

Tuchel this week said he wouldn’t want to fight Antonio Rudiger or Cesar Azpilicueta, such is the ferocious will to win coursing through Chelsea’s most vocal players.

Both defenders lived up to Tuchel’s billing as they fought tooth and nail to keep Porto at bay in a niggly clash.

Chelsea cruise
Mason Mount had scored Chelsea’s opening goal in the first leg and he was inches away from netting again when his long-range drive was deflected over.

But Corona couldn’t keep his composure and Jorginho did enough to ensure the shot flashed wide.

Mendy’s blunder was forced in part by the relentless pressing that epitomised Porto’s frenetic start, but Chelsea matched their work rate as the foul count rose for both teams.

N’Golo Kante was fit to start for Chelsea after a hamstring problem and the France midfielder teed up a good chance for Kai Havertz, whose limp finish failed to match the quality of his team-mate’s incisive raid.

Having already wasted one good chance, Corona’s profligacy let Porto down again when he lashed hurriedly over from 12 yards after Ben Chilwell misjudged Otavio’s high ball.

Chelsea had never lost a knockout tie in Europe after winning the first leg away from home and that record remained pristine as Porto ran out of steam in the second half.

Chilwell’s cross presented Christian Pulisic with a clear sight of goal, but the winger couldn’t get enough power on his wayward volley.

Desperately short of a cutting edge, it took Porto until the 68th minute for their first effort on target as Taremi’s header from Corona’s cross forced Mendy to save.

Taremi’s eye-catching strike with seconds left came far too late for a dramatic finale, with tempers flaring in a heated exchange involving Rudiger and several Porto players after the final whistle.

An ambulance vehicle, on Tuesday, was involved in an accident while conveying a …

In my secondary school my friends were, 1 from Edo state, 4 were yoruba of which…

In collaboration with the Sickle Cell Unit, UBTH, Cell Corps is proud to announc…

An ambulance vehicle, on Tuesday, was involved in an accident while conveying a …

In my secondary school my friends were, 1 from Edo state, 4 were yoruba of which…

In collaboration with the Sickle Cell Unit, UBTH, Cell Corps is proud to announc…

Proudly Edo pikin ! Rt if you are from Edo State! …

Why Edo State Must Have Another Airport – Obaseki – – – #News #airport #BeninA…