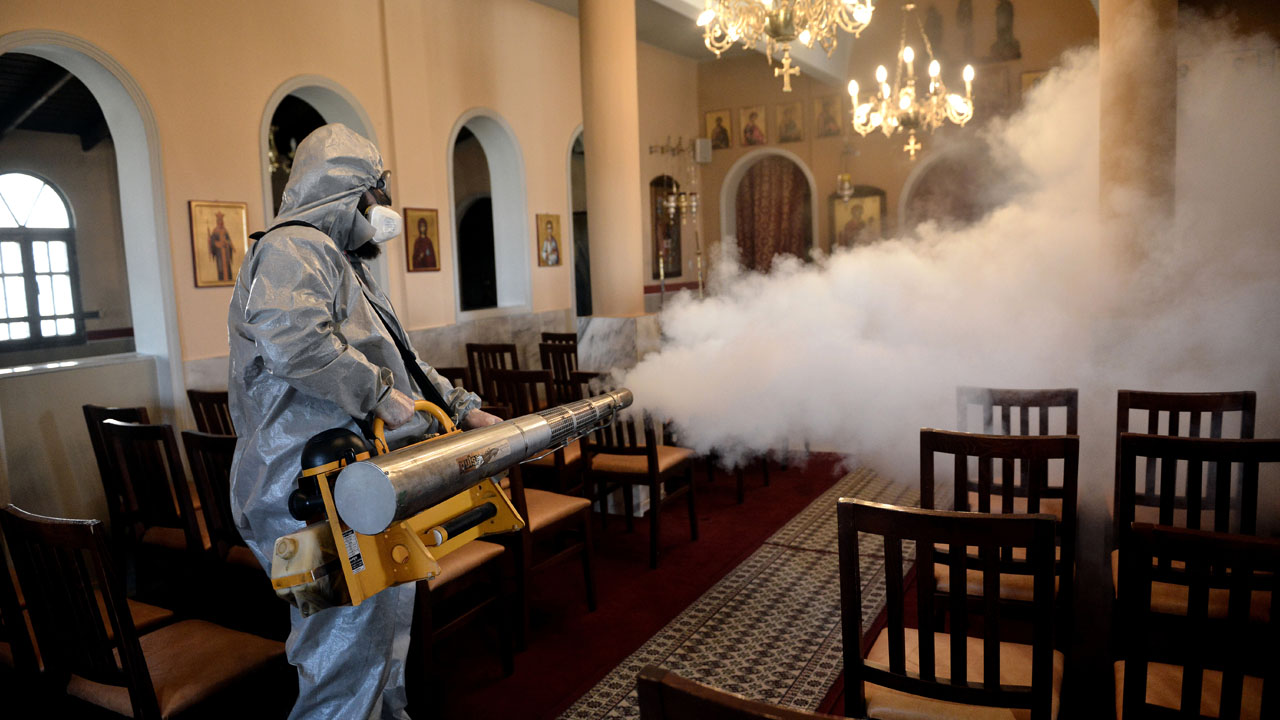 (FILES) In this file photo taken on March 12, 2020 a worker uses a thermal fogger to disinfect a church in Thessaloniki. – For months, many Greek clerics treated the country’s lockdown restrictions with scepticism, even hostility. But when several prominent members — including its leader — fell ill with the virus, the powerful Orthodox church had to face reality. At least five prominent clerics have been stricken with the virus in the past month, one of whom has died; (Photo by Sakis MITROLIDIS / AFP)

Greece said Thursday it will extend a coronavirus lockdown by a week to December 14, citing persistently high infection rates.

An exception will be made for stores selling Christmas decorations, which can open from December 7, he said.

After weathering the first wave of the pandemic with relatively low fatalities compared to other European countries, Greece has been hit with scores of deaths daily in recent months.

More than 2,600 people have died of the virus, including nearly 90 on Wednesday, and over 600 people are in intensive care.

“Many hospitals in northern Grece are still under serious pressure,” Petsas said.

He added that the first vaccines are expected in Greece by early January and that the country will be able to inoculate more than 2.1 million people per month.

The government has said that vaccination will be on a voluntary basis.

Imposed on November 7 for three weeks, the lockdown had already been extended by a week to December 7.

Petsas on Thursday also dismissed media reports alleging that daily government coronavirus tallies have been distorted because of shoddy bookkeeping at the state health organisation.

He called the claims “conspiracy theories” that have been denied by the state committee of health experts monitoring the virus.

A magistrate has ordered a preliminary investigation into the media reports.

Prime Minister Kyriakos Mitsotakis also faced criticism this week over a mountain bike trip on the outskirts of Athens last weekend, at a time when other Greeks are only allowed to exercise outdoors near their homes.

Oba of Benin, make your move. …

Oba of Benin, make your move. …

“Oyo” —slippery place. Oranmiyan had set out to go retake the land of his father…

On security and #COVID19 in Edo state …