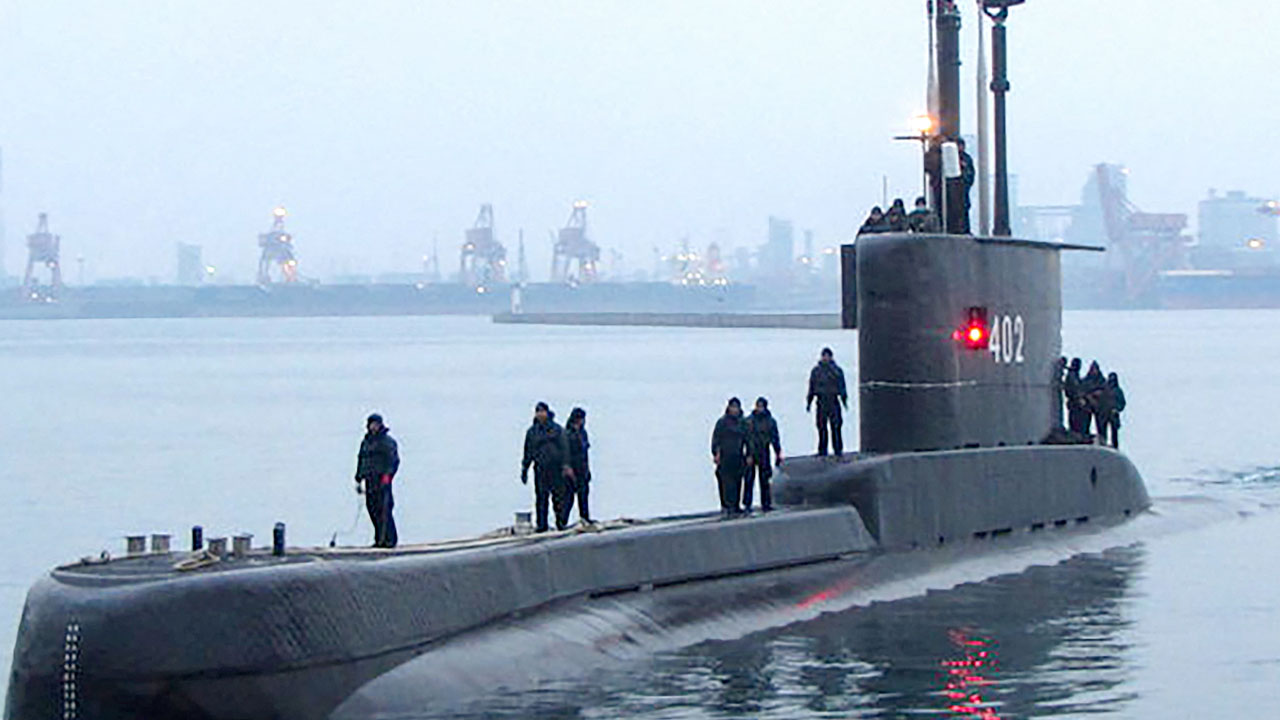 This undated handout from the Indonesia Military released on April 21, 2021 shows the Indonesian Cakra class submarine KRI Nanggala 402 docking at the naval base in Surabaya. – Indonesia’s military said it was searching for the submarine with 53 crew aboard after losing contact with the vessel during naval exercises off the coast of Bali on April 21, 2021. (Photo by Handout / INDONESIA MILITARY / AFP) /

Indonesia’s military said it was searching for a submarine with 53 crew aboard after losing contact with the vessel during naval exercises off the coast of Bali on Wednesday.

The German-built KRI Nanggala 402 was scheduled to do live torpedo exercises when it asked for permission to dive early Wednesday morning, authorities said.

“After permission was given according to the procedure, the submarine lost contact and could not be reached,” the defence ministry said.

A helicopter looking for the missing vessel spotted an oil spill in waters where the submarine was thought to have submerged, it added.

The navy said it has not pinpointed the exact location of the submarine but had narrowed down the search based on the spill.

The oil “could indicate damage on the body” of the submarine, navy spokesman Julius Widjojono told MetroTV.

The military has dispatched some 400 personnel and two warships in the hunt, while a third vessel was being deployed from the capital Jakarta.

It also sent out an international distress signal, and “several countries have responded and are ready to help including Singapore, Australia and India,” the defence ministry said.

Indonesia, which has been moving to upgrade its military equipment in recent years, has five German and South Korean-built submarines in its fleet.

While the Southeast Asian archipelago has not previously suffered a major submarine disaster, other countries have been struck by accidents in the past.

Submarine disasters
Among them was the horrific sinking in 2000 of the Kursk, the pride of Russia’s Northern Fleet.

The submarine was on manoeuvres in the Barents Sea on August 12, 2000 when it sank with the loss of all 118 aboard. An inquiry found a torpedo had exploded, detonating all the others.

Most crew died instantly but some survived for several days — with a few keeping heart-breaking diaries written in blood to their loved ones — before suffocating.

It was the Russian navy’s worst-ever disaster.

Seventy Chinese naval officers and crew were killed, apparently suffocated, in an accident on a Ming-class submarine conducting exercises in 2003.

Then, in 2008, 20 people were killed by poisonous gas when a fire extinguishing system was accidentally activated on a Russian submarine being tested in the Sea of Japan.

In 2018, authorities found the wreckage of an Argentine submarine that had gone missing a year earlier.

Crushed from an implosion, the ARA San Juan was located at a depth of more than 900 metres (3,000 feet) in a desolate area of undersea craters and canyons 400 kilometres (250 miles) off the coast of Argentina.

The accident took the lives of 44 sailors.

In 2019, a French submarine that had gone missing in the Mediterranean over 50 years beforehand was found.

The diesel-electric Minerve submarine was lost off France’s southern coast with 52 sailors on board on January 27, 1968.

The Minerve was on a training mission in bad weather when it went down while returning to its base in Toulon, France’s main Mediterranean naval port.

Experts have speculated that the disaster was caused by a problem with the Minerve’s rudder, a collision with another boat, the explosion of a missile or torpedo, or a fault with its oxygen supply systems.

Follow Coal country is in free fall and is pleading for help from Washington….

Nigerians need leaders that can unite the country – Osinbajo

Selling an entrepreneurial view of Nigeria, By ‘Tope Fasua

Comrade Oshiomhole: Not completing my tenure as national chairman of APC no big deal