06:14 GMT – China willing to help N.Korea in fight against virus

Quoting Xi’s letter, Chinese state television said the Chinese president was very concerned about the situation in North Korea and the health of its people.

The supportive message came a day after Kim congratulated Xi for his handling of the pandemic and “highly appreciating that he is seizing a chance of victory in the war against the unprecedented epidemic”.

05:33 GMT – Coronavirus forces Russia to scale down Victory Day in blow to Putin

Russia marks 75 years since the Soviet victory over Nazi Germany in World War Two on Saturday, but the coronavirus outbreak has forced it to scale back celebrations seen as boosting support for the Kremlin.

Putin has described Victory Day celebrations as sacred to Russians but said a big public event was too risky during the pandemic. As of Friday, Russia had reported 187,859 coronavirus cases and 1,723 deaths.

Thailand reported four new coronavirus cases and one more death on Saturday, bringing the total to 3,004 cases and 56 deaths since the outbreak started in January, according to Reuters news agency.

Of the new cases, two are from the southern province of Yala, where the authorities are aggressively testing people due to high infection rates. One was linked with previous cases and one had a risk history from public places, he said. 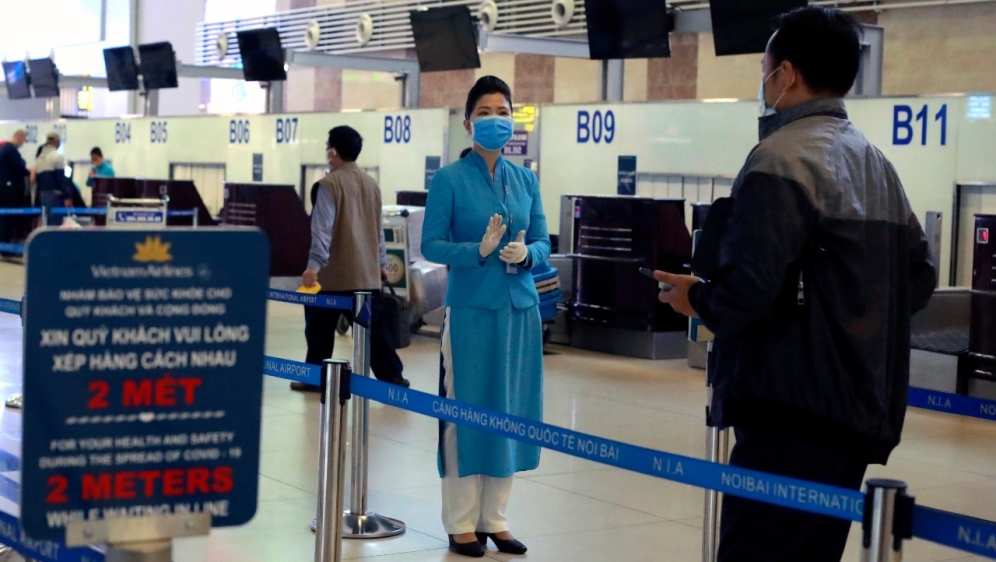 South Korea on Saturday reported 18 fresh cases of the new coronavirus, including 12 in Seoul, as health workers scrambled to trace contacts following a slew of transmissions linked to clubgoers.

The latest infections brought national totals to 10,840 cases and 256 deaths.

Vice Health Minister Kim Gang-lip told a virus briefing that officials are mapping out plans to share hospital capacities between the capital and nearby towns to ensure swift transport of patients so that a spike of infections in one area doesn’t overwhelm the health care system. He said the plans will go into effect if the daily jump in infections exceeds 100, which hasn’t happened since April 1.

Australia’s most populous states held back from easing COVID-19 restrictions on Saturday even as some states allowed small gatherings and got ready to open restaurants in line with the federal government’s three-stage plan for reopening businesses.

Prime Minister Scott Morrison on Friday outlined plans to remove most curbs by July in a three-step process to get nearly 1 million people back to work, as the country has reined in new COVID-19 infections to less than 20 a day with strict lockdowns.

Australia’s total deaths from COVID-19 remain just below 100, while the number of cases were close to 7,000.

China reported one new coronavirus case at the end of Friday, unchanged from the day before, data from the national health authority showed on Saturday.

One new imported case was recorded on May 8, the National Health Commission said in a statement.

The commission also reported 15 new asymptomatic cases for Friday, versus 16 the previous day.

China’s total number of coronavirus cases now stands at 82,887, although 78,000 cases have recovered, while the official death toll remains unchanged at 4,633.

Brazil’s economy minister warns there could soon be product shortages in supermarkets if state quarantine measures are allowed to continue.

Paulo Guedes told an audience at the Supreme Court, including its chief justice, that Latin America’s largest market is at risk of “collapse” similar to what happened in neighboring Venezuela.

Guedes  was joined by President Jair Bolsonaro and a group of industry leaders, who together walked to the top court to make their case for rollback of restrictions even as Brazil’s coronavirus cases continue to surge. 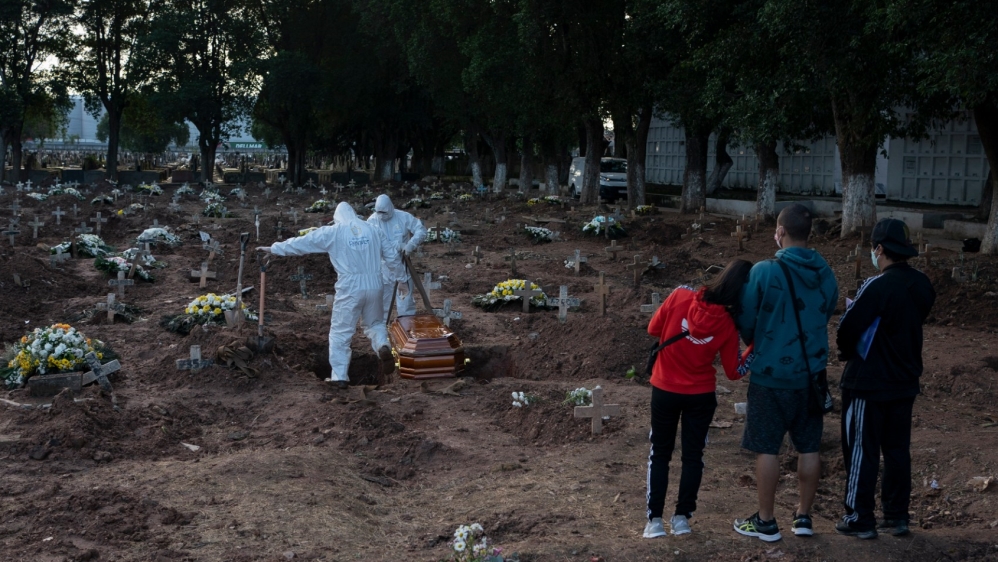 Relatives attend the burial of 71-year-old Neide Rodrigues Rosa, who died from the new coronavirus according to her son Sergio Rodrigues, in Rio de Janeiro on Friday [Leo Correa/AP]

A military member working in close proximity to President Donald Trump tested positive for the new coronavirus. The White House said Trump and Vice President Mike Pence have since tested negative for the virus and “remain in good health.”

Spokesman Hogan Gidley says in a statement the military member works “on the White House campus” and tested positive on Wednesday.

The number of confirmed coronavirus cases in Germany increased by 1,251 to 168,551, data from the Robert Koch Institute (RKI) for infectious diseases showed on Saturday.

Argentinian President Alberto Fernandez has extended until May 24 a quarantine for its capital Buenos Aires but relaxed the restriction aimed at slowing the spread of the new coronavirus elsewhere in the country.

The lockdown, which was in place since March 20 and is due to expire on Sunday, will remain in place in the capital and its outskirts, Fernandez said in a televised address.

Fernandez said he was “extremely proud” of Argentines for observing the strict social isolation measures. As of Friday, the country had registered 5,611 confirmed cases of the virus and 293 deaths.

The leaders of US congressional foreign affairs committees have written to more than 50 countries asking them to support Taiwan’s inclusion in the World Health Organization, citing the need for the broadest effort possible to fight the coronavirus pandemic, congressional sources told Reuters.

Taiwan, which is not a member of the United Nations, has been excluded from the WHO, which is a U.N. agency, due to objections from China.

“As the world works to combat the spread of the COVID-19, a novel coronavirus first identified in Wuhan, China, it has never been more important to ensure all countries prioritize global health and safety over politics,” the lawmakers said in their letter, sent on Friday, and seen by Reuters. 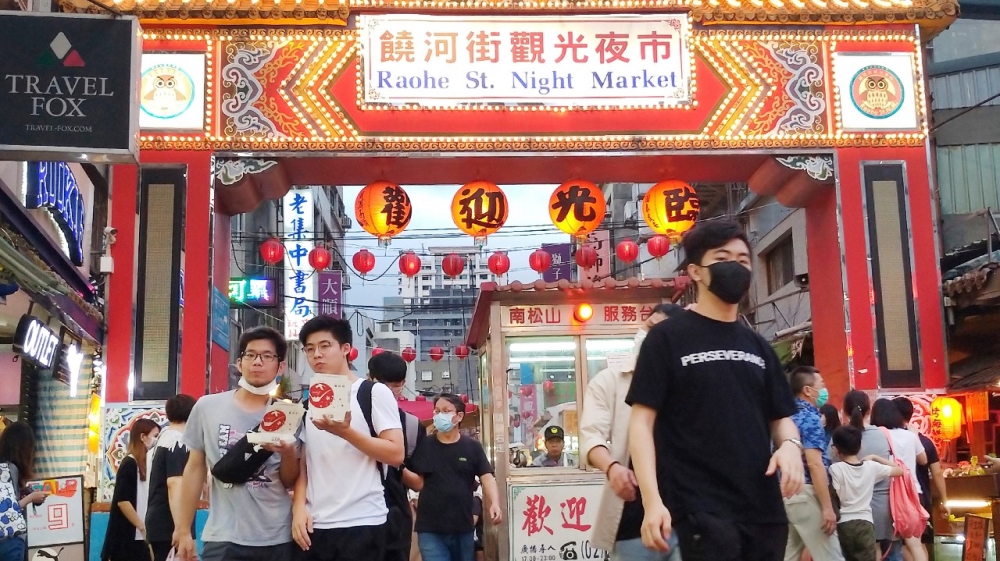 Three nurses, all sisters, were found dead with signs of strangulation in the northern Mexican state of Coahuila, officials said on Friday, an apparent triple murder that follows a series of assaults on health workers in the coronavirus pandemic.

Officials said they were investigating the crime but that the motive was not clear. Health workers have faced increased aggression in Mexico in recent weeks over fears of contagion.

Javier Guerrero, a top official for Mexico’s main public health service IMSS in Coahuila, described the deaths of the three nurses as murders. They “happened at a moment when our health workers are the most important element to face the health crisis”, he said. 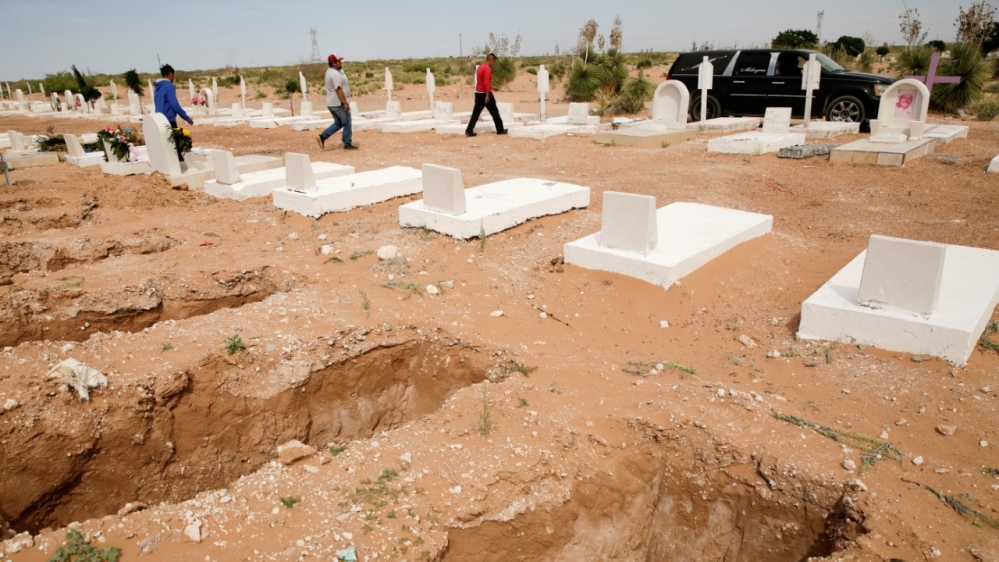 Gravediggers walk toward a hearse carrying the body of a woman, who died of the coronavirus disease (COVID-19), before her funeral, at a cemetery in Ciudad Juarez, Mexico May 8, 2020. REUTERS/Jose Luis Gonzalez [Reuters]

Merkel spokesman Steffen Seibert says that during the call, the chancellor and the pontiff advocated support for poor countries in the virus crisis. He says it centred on “the global humanitarian and political situation in view of the corona pandemic” and on the significance of solidarity in Europe and the world.

Merkel invited Francis to visit Germany when that is possible again.

For key developments from yesterday, May 8, go here.

The fear of Corona virus (in Cardi b’s voice)…

If you went to Secondary School in Nigeria, can you relate?…

Edo state don discover there wearhouse like this, Oba a to pe ye ise…

Oba of Benin is a big deal to Bini people sha. That’s a fact. …

Omo, the fact that nothing yet has happened to the people that took the Oba of L…

Said the same thing. Imagine hoodlums trying to invade royal palace of Oba of Be…

He was cursed by the Oba of Benin .Now otoge #EndSARS …

Just a random midnight thought: Can Oba of Benin’s palace be raided like that o…

On my air to Canada, I got no #visa but I’m from Benin city RT IF YOU YOU’RE NO…

Abeg who know where them keep the COVID 19 palliatives in Edo state…. please …

All this Obas no get power shi shi. Oba of Benin included. Na just mouth them de…

When ever I tell people my dad is from Edo state and my mom is from Delta, I liv…