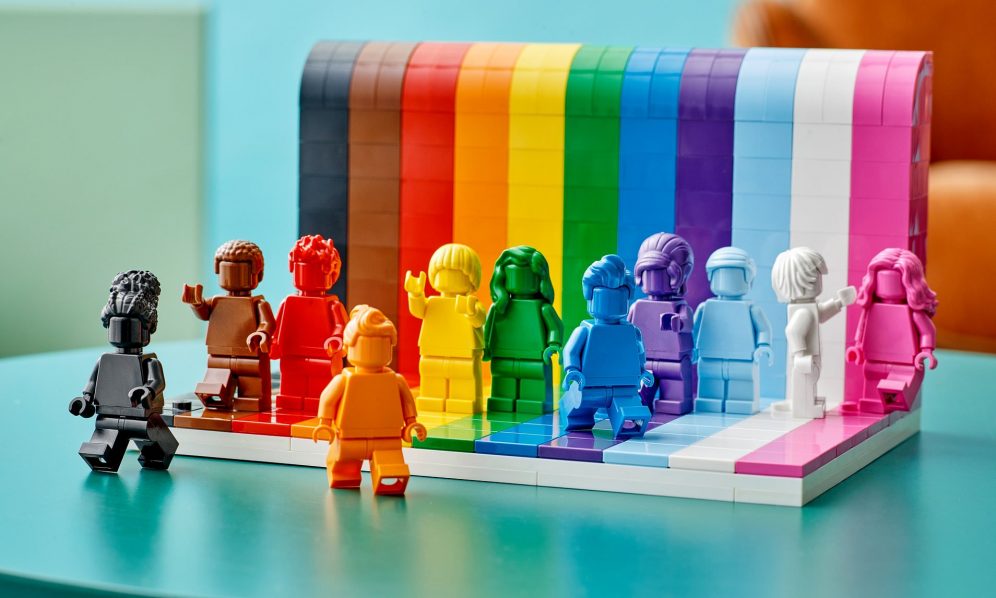 Lego is launching a rainbow-themed LGBTQ+ set called ‘Everyone Is Awesome’ with no gender assigned to all but one of the figures.

Pale blue, white, and pink represent the transgender community, while black and brown stand for the different skin colours across the LGBTQ+ community, according to The Guardian.

The purple figure is the only one that has a specific gender and, with a beehive wig – represents ‘the fabulous drag queens out there,’ according to the designer, Matthew Ashton.

Ashton, Vice President of Design at the Danish toymaker, originally created the set for his own desk but it soon attracted the attention of colleagues.

‘Other members of Lego’s LGBTQ+ community came by to tell me they loved it,’ Ashton told The Guardian. ‘So I thought, “maybe it’s something we should share.”‘

Ashton, who was executive producer for the 2014 Lego Movie, said that he had struggled with being LGBTQ+ during his childhood. Ashton said:

Trying to be someone I wasn’t was exhausting. I wish, as a kid, I had looked at the world and thought: “This is going to be OK, there’s a place for me.” I wish I’d seen an inclusive statement that said “everyone is awesome.” I wanted to create a model that symbolises inclusivity and celebrates everyone, no matter how they identify or who they love. Everyone is unique, and with a little more love, acceptance, and understanding in the world, we can all feel more free to be our true AWESOME selves! This model shows that we care and that we truly believe “Everyone is awesome!”

Previous LGBTQ+ representations by Lego have been more subtle nods, including a little rainbow flag in a build of Trafalgar Square and a bride and groom sold separately so that fans could couple them how they wished.

The new set will go on sale on June 1, the first day of Pride month.

NDDC has failed, not living up to its responsibilities, Obaseki insists – Edo State

Get Alerts in Million: Open a Fidelity Bank savings account to win big