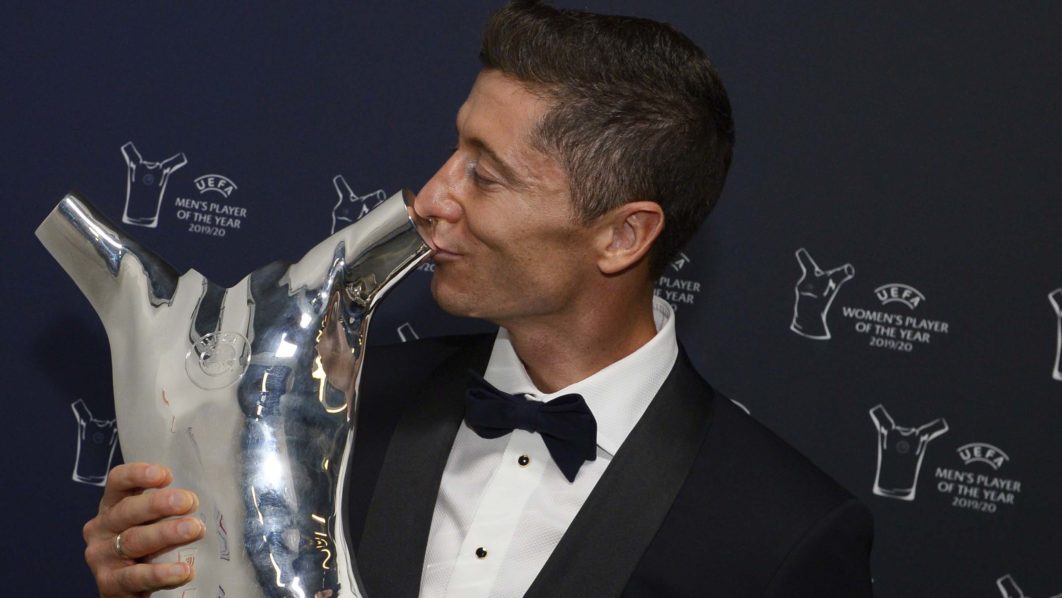 Robert Lewandowski was named UEFA men’s player of the year on Thursday following a superb season in which he won the treble with Bayern Munich.

Lewandowski was at the Champions League group-stage draw in Geneva to receive the award, just weeks after Bayern won the 2019/20 edition of the competition.

The Poland striker, who scored 55 goals in 47 games as Bayern also won the Bundesliga and German Cup, saw off Bayern team-mate Manuel Neuer and Manchester City’s Kevin de Bruyne to win the award.

“It’s an amazing feeling, because you work so hard, so this trophy is something special,” said Lewandowski after receiving the award.

“I have to say thank you to my team-mates and coaches who helped me get where I am. Also my family have given me so much support and are so important.”

Lewandowski also picked up the award for best forward in last season’s Champions League after amassing 15 goals in 10 games. In one match against Red Star Belgrade he needed just 14 minutes to score four times.

The 32-year-old was also top scorer in the Bundesliga last season with 34 goals, equal to a goal a game in the 18-team league.

It was the fifth time he claimed the award for the highest number of goals in the German top flight since arriving at Bayern from Borussia Dortmund in 2014.

Lewandowski would have been the strong favourite to win this year’s Ballon d’Or had it not been cancelled by France Football magazine due to the coronavirus pandemic.

It was a good evening overall for Bayern, with Neuer winning the 2019/20 Champions League goalkeeper of the season, Joshua Kimmich winning defender of the campaign and Hansi Flick being named men’s coach of the year.

They will also be favourites to qualify for this season’s Champions League knockout stages after being drawn in Group A alongside Atletico Madrid, Salzburg and Lokomotiv Moscow.

Let us remember that Sanusi was formerly the Emir of Kano .When a king defile hi…

Let us remember that Sanusi was formerly the Emir of Kano .When a king defile hi…

Just to correct an impression. Folks are saying there is no power in the staff o…

Oba of benin get power, him get power but the British come carry all him juju h…

He should come and say it in edo state …

So all these Monarchs in Nigeria, what is the point of having them around? What …

They shouldn’t try it with Oba of Benin sha. That one no go funny at all. …

All the jazz wey Oba of Benin get, white man still loot am. Talkless of this fra…

Go get the Oba of Benin Crown or staff of office. Don’t change the conversation….