Brother to late Sound Sultan, Baba Dee has confirmed the arrest of a man who hacked into his brother’s account after death.

Baba Dee had on his Instagram account said the young man identified as Victor Majekodunmi hacked into the Sound Sultan’s account, posing as Farida, the singer’s wife to defraud people.

He said the suspect who deleted the singers’ memories on the page was now in police custody.

Baba Dee thanked Nigerians and the Lagos State Police Commissioner for his support in nabbing the criminal.

He wrote; ”This is the face of the scammer that hacked into my brother @soundsultan Instagram account after his death. His Name is victor Majekodunmi, a young with great potential yet so evil and heartless.

”I’m happy to announce that we have taken control of the account and he is presently cooling off in police custody. Thanks to everybody that showed concern and helped nab the young, hardened criminal.”

Recall that Sound Sultan passed away on Sunday, 11th of July after battling cancer. 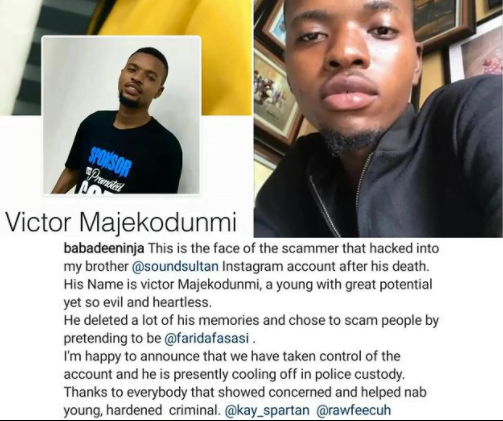 How to Clean Your Makeup Brushes

This story of oodua origin is more plausible, though there are still questions l…

I don’t quite understand…. Do Edo state have any Governor? Omo nothin jx dy go…

During the last governorship election contest in Edo state, the slogan was Edo i…