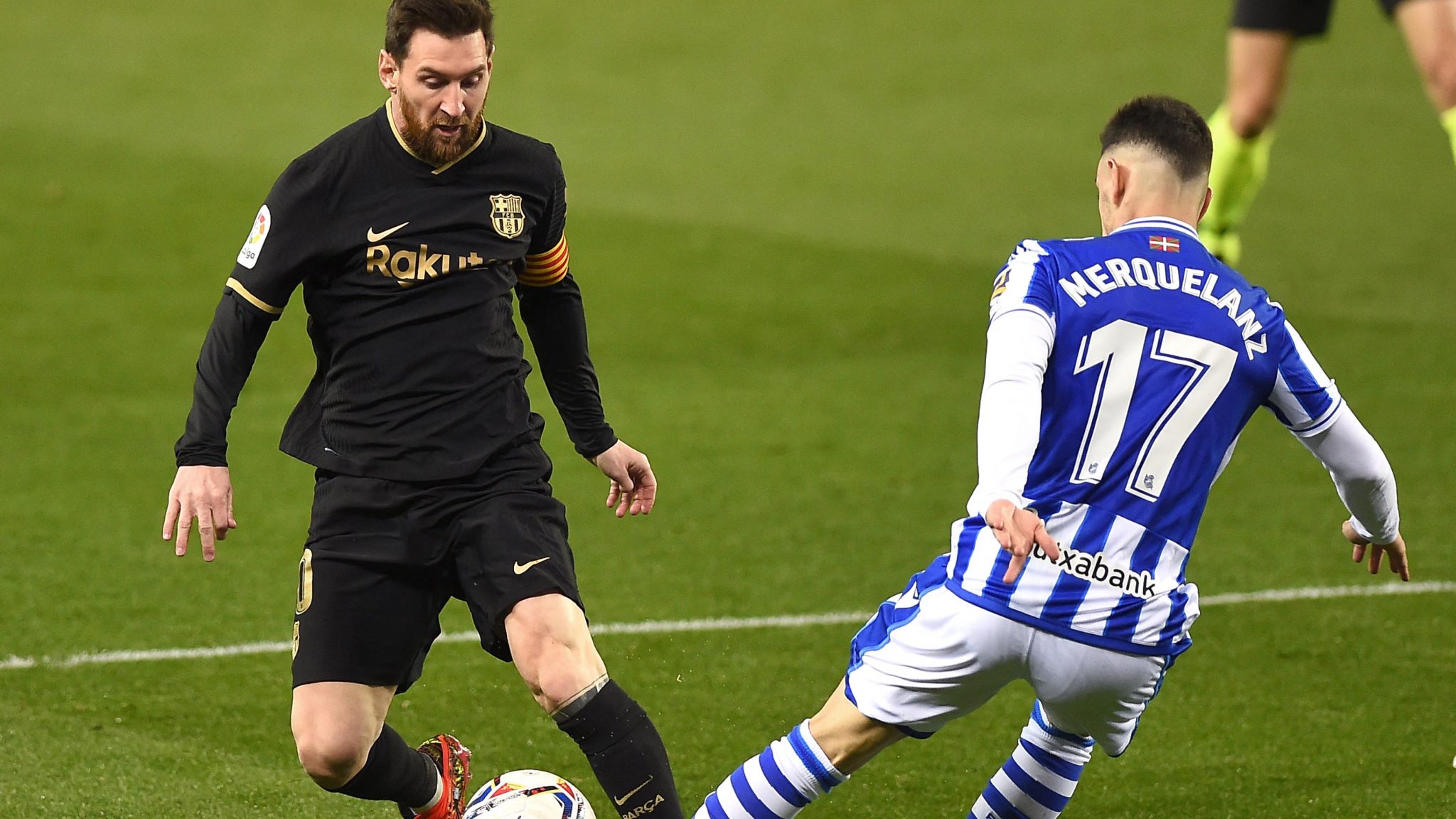 Lionel Messi scored twice on Sunday as Barcelona trounced Real Sociedad 6-1 to keep the pressure on Atletico Madrid, who squeezed past Alaves thanks to a late penalty save from Jan Oblak.

Oblak’s 86th-minute heroics denied Joselu and ensured Luis Suarez’s header was enough for a 1-0 victory at the Wanda Metropolitano, meaning the gap at the top of La Liga remains at four points, with 10 games left to play.

But the contrast between Atletico’s nervy win against 19th-placed Alaves and Barca’s demolition of a Real Sociedad side with hopes of qualifying for Europe spoke volumes about where the momentum lies in the Spanish title race.

Atletico will hope Oblak’s save can prove to be a turning point after a challenging few weeks, while the international break might offer Diego Simeone’s side a chance to reset and refresh ahead of the run-in.

“There are games where you suffer but that’s what makes football beautiful,” said Oblak.

Simeone said: “Like all great teams, there is always one that scores a lot of goals and one that makes a lot of saves. They are both decisive players who make the team stronger.”

Barcelona, meanwhile, have hit their stride, their six goals against Real Sociedad no less than they deserved for a scintillating attacking display, and perhaps their best since Ronald Koeman took charge.

Messi scored his 11th and 12 goals in his last 10 games, and made it 16 in 12 this year. It is a far cry from his underwhelming start to the season, when the 33-year-old looked weighed down by talk about his future.

Messi’s form represents the biggest threat to Atletico’s position at the top of the table but he was not alone at the Reale Arena, where Sergino Dest scored twice either side of half-time after Antoine Griezmann had slammed in the opener.

Ousmane Dembele and Real Sociedad’s Ander Barrenetxea — with arguably the goal of the night — both registered between Messi’s double in the second half.

For Barcelona, it is a ninth consecutive away win in the league, with a club record 10th within their grasp if they beat Real Madrid in the Clasico on April 10.

Real Sociedad must now try to recover before they play Basque rivals Athletic Bilbao in the postponed Copa del Rey final from last year on April 3.

Dest had already hit the crossbar when Messi set Jordi Alba free down the left and while Dembele’s finish was saved, Griezmann was on hand to slam home the rebound.

Marc-Andre ter Stegen had to rectify his own poor clearance by getting down low to deny Alexander Isak but Real Sociedad’s resistance was brief.

Messi slipped in Dest to fire in and then Alba pulled back from the other side for the American to make it three.

Messi snuck in behind early in the second half, poking in Sergio Busquets’ ball over the top before Dembele was allowed to glide through unchallenged, and impressively drove into the far corner.

Barrenetxea at least put his side on the scoreboard, and brilliantly, by nipping inside Frenkie de Jong and thundering a shot into the top corner but Messi had the last word, a crisp finish curling inside the near post.

Messi stays ahead of Suarez in the La Liga scoring charts, despite the Uruguayan’s excellent finish nine minutes into the second half against Alaves.

Thomas Lemar turned the ball around the corner to Marcos Llorente, who fed Kieran Trippier racing down the right, and he curled a cross in on the run to the near post, where Suarez headed in.

But without a second goal, Alaves always had a chance and they were given a golden one after Stefan Savic was judged to have put an arm across Luis Rioja just inside the penalty area.

Joselu stepped up and struck it well to his left but Oblak read it right and, with his left foot still pinned to the line, sprung out and pushed the ball away.

AFTER MY WEDDING, MY HUSBAND USED ME FOR MONEY BUT MY GHOST RETURN TO PROTECT MY SON- NIGERIAN MOVIE

17 October 1969: The mortal remains of the second indigenous Chief of the Air St…

Insecurity created by Nigerians, we can end it – Governor Masari