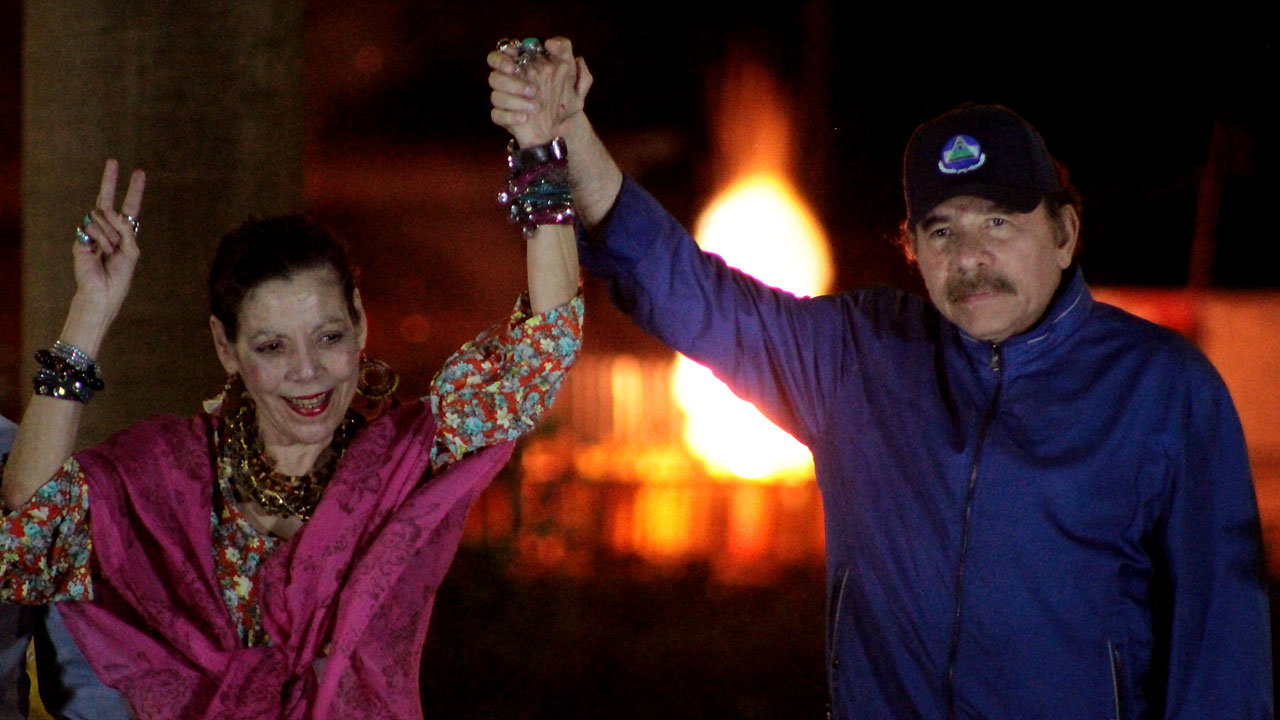 (FILES) In this file photo taken on March 21, 2019 Nicaragua’s President Daniel Ortega (R) and his wife, Vice-President Rosario Murillo, gesture at the crowd during the inauguration of the Nejapa flyover in Managua. – Nicaragua President Daniel Ortega will as expected stand for a fourth consecutive term in November’s general election, his Sandinista National Liberation Front (FSLN) party said on August 2, 2021. “We have our formula, our candidates were elected unanimously,” said Gustavo Porras, an FSLN legislator, during the party congress. Ortega’s wife, Vice-President Rosario Murillo, will again be his running mate. (Photo by Maynor Valenzuela / AFP)

“We have our formula, our candidates were elected unanimously,” said Gustavo Porras, an FSLN legislator, during the party congress.

The presidential power couple’s election ticket was ratified by all 2,932 members present at the FSLN virtual congress just hours before the enrolment deadline for candidates.

Former leftist guerrilla Ortega, 75, who is accused by his opponents of authoritarianism, has been in power since 2007.

His 70-year-old wife has been his vice-president since the last election in 2017.

“We are here to continue the fight against poverty,” said Murillo.

The government has been accused of repression after detaining more than 30 opposition figures during the last two months, including seven presidential hopefuls.

It left the main opposition alliance submitting a surprise pairing to run for president in November, with former right-wing guerrilla Oscar Sobalvarro, 68, supported by Berenice Quezada, a 27-year-old ex-beauty queen with no political experience.

The FSLN congress also validated the 92 candidates for the National Assembly and 20 for the Central American Parliament.

The closing of inscriptions comes amidst an atmosphere of heightened tensions in Nicaragua as the European Union on Monday slapped new sanctions on Murillo, her son Juan Carlos and six government officials for “serious human rights violations.”

Ortega, Murillo and top government officials had already been sanctioned by the United States and Canada over the violent repression of protesters in 2018 that left more than 300 people dead.

Critics of Ortega say the raft of arrests since the beginning of June has been aimed at removing any serious competition from November’s election.

One of those detained is Cristiana Chamorro, the daughter of former president Violeta Barrios de Chamorro, who defeated Ortega in the 1990 election.

Chamorro was the favorite to defeat Ortega this time around.

Aiming to free ‘political prisoners’
The detained opposition figures have been accused of “treason” and threatening “sovereignty,” under a controversial law initiated by Ortega and approved by parliament in December.

They are accused of supporting foreign sanctions and interference but the law has been widely criticized as a means of freezing out challengers and silencing opponents.

The potential presidential opponents detained had mostly agreed to present a single opposition candidate to improve their chances of unseating Ortega.

The Citizens Alliance for Liberty (CXL) last week picked Sobalvarro as its candidate.

Sobalvarro is a former member of the Contras, a right-wing guerrilla group that was backed by the United States and fought a three-year armed struggle against the Sandinista government led by Ortega in the 1980s.

“We hope there will be an end to the siege and repression” of the opposition, said Sobalvarro as he enrolled for the election.

Quezada, who was Miss Nicaragua in 2017, said she would campaign for the freedom of “political prisoners.”

Late in the afternoon on Monday, businessman Milton Arcia was named as the presidential candidate for the Constitutionalist Liberal Party (PLC), which is the largest opposition party in parliament.

The PLC has indicated it would be willing to collaborate with the government.

Ortega, a former left-wing guerrilla, led the country from 1979-1990 following the overthrow of the US-backed Somoza family dictatorship.

He was re-elected president in 2007, and in 2014 pushed through a constitutional amendment that scrapped presidential term limits, opening the way for him to remain president for life.

Good To Be In The City Of Ekpoma, Edo State! There Is About To Be A Shift In The…

But them say you get three children for benin edo state …