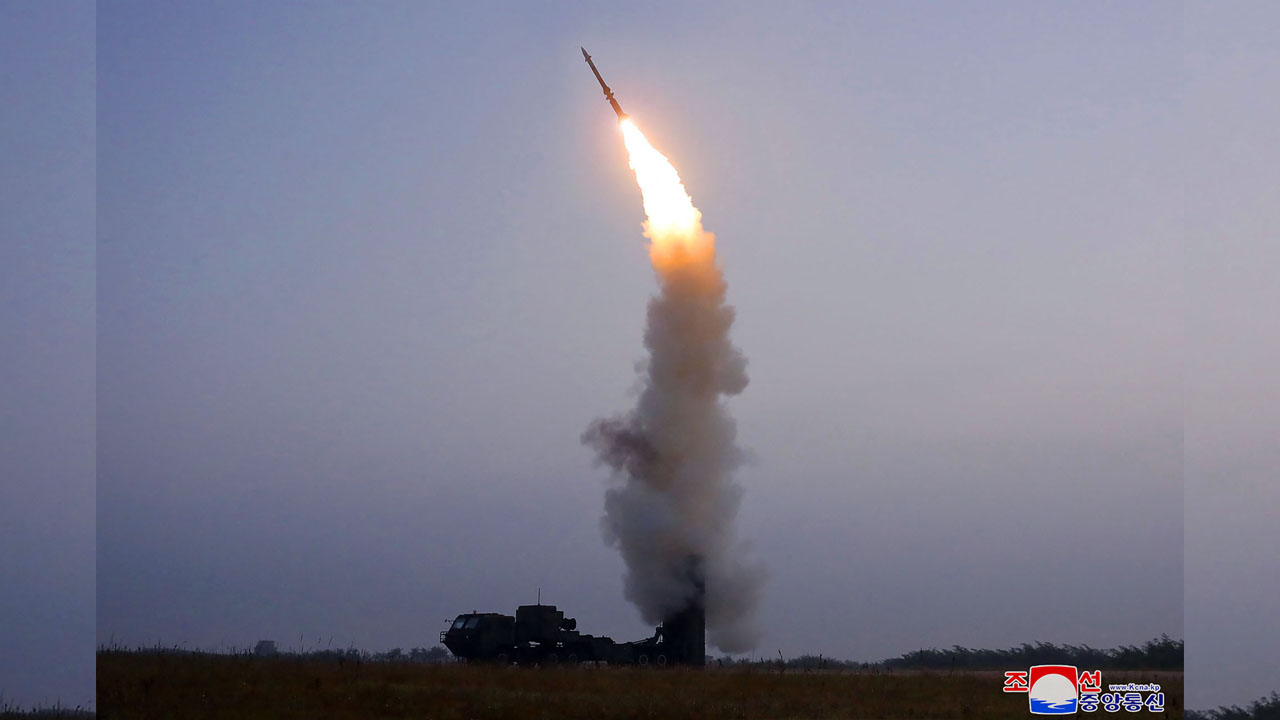 This picture taken on September 30, 2021 and released from North Korea’s official Korean Central News Agency (KCNA) on October 1 shows a test-fire of a “newly developed” anti-aircraft missile carried out by the Academy of Defence Science of the DPRK. (Photo by STR / KCNA VIA KNS / AFP) / – South Korea OUT /

North Korea has successfully fired a new anti-aircraft missile, state media said Friday, as the United Nations Security Council prepares to meet in response to a recent flurry of weapons tests by the nuclear-armed nation.

A picture in the official Rodong Sinmun newspaper showed the missile ascending at an angle into the sky from a launch vehicle on Thursday.

It is the latest in a series of tension-raising steps by Pyongyang, which had until recently been biding its time since the change in US administrations in January.

In September, it launched what it said was a long-range cruise missile, and earlier this week tested what it described as a hypersonic gliding vehicle, which South Korea’s military said appeared to be in the early stages of development.

And on Wednesday, the North’s leader Kim Jong Un decried Washington’s repeated offers of talks without preconditions as a “petty trick”, accusing the Biden administration of continuing the “hostile policy” of its predecessors.

Anti-aircraft missiles are much smaller than the ballistic missiles the North is banned from developing under United Nations Security Council resolutions, and harder to detect from afar.

Pyongyang is under multiple international sanctions over its weapons programmes, which have made rapid progress under Kim, including missiles capable of reaching the whole of the US mainland and by far its most powerful nuclear test to date.

Friday’s UN Security Council meeting on North Korea, called by the United States, Britain and France, was originally due to take place on Thursday.

But it was delayed by Russia and China, who asked for more time to study the situation, a diplomatic source said.

Beijing is Pyongyang’s key ally and in normal times its biggest provider of trade and aid, although the North has since early last year been under a self-imposed blockade after it shut its borders to defend itself against the coronavirus pandemic.

The North has a long history of using weapons tests to ramp up tensions, in a carefully calibrated process to try to forward its objectives.

With its latest actions, Kim was looking to “test the waters with Washington” and its “threshold for weapons provocations”, Soo Kim of the RAND Corporation told AFP.

“He may wish to see how much he can get away with until the Biden administration starts to flinch,” she added.

The South’s President Moon Jae-in has recently reiterated his calls for a formal declaration that the Korean War is over — hostilities ceased in 1953 with an armistice rather than a peace treaty.

Moon has only a few months left in office and Soo Kim pointed out he could be looking to secure an “accomplishment” with the North before his term runs out.

“Kim may be playing to his strengths — and the Moon administration’s weaknesses — by taking things up a notch on the provocation ladder.”

Communication lines
Talks between Pyongyang and Washington have been effectively at a standstill since the collapse of a 2019 Hanoi summit between Kim and then-president Donald Trump over sanctions relief and what North Korea would be willing to give up in return.

Washington and Seoul are security allies, and the United States stations around 28,500 troops in the South to protect it from its neighbour.

Under President Joe Biden, the United States has repeatedly declared its willingness to meet North Korean representatives anywhere, at any time, without preconditions, while saying it will seek denuclearisation.

But in a speech to the Supreme People’s Assembly, the North’s rubber-stamp parliament, Kim condemned the offers as “no more than a petty trick for deceiving the international community and hiding its hostile acts”, according to KCNA.

The new administration was pursuing the same “military threats” and “hostile policy” as the past, but in “more cunning ways and methods”, he said.

Nonetheless, he expressed a willingness to restore North-South communication lines in early October.

North Korea has not shown any willingness to give up its arsenal, which it says it needs to defend itself against an invasion by the United States.

I think the Oba of Benin is the most respected Monarch in Nigeria….

OBA of Benin Alaafin of OYO Ooni Of Ife Land …

No Dispute Over Ownership of Artefacts, Says Oba of Benin …

The Oba of Benin, Oba Ewuare II, on Wednesday in Benin, said that Cambridge Univ…

No Dispute over Ownership of Benin Artefacts, Says Oba of Benin #benin #artefa…

I think the Oba of Benin is the most respected Monarch in Nigeria….

OBA of Benin Alaafin of OYO Ooni Of Ife Land …

No Dispute Over Ownership of Artefacts, Says Oba of Benin …

The Oba of Benin, Oba Ewuare II, on Wednesday in Benin, said that Cambridge Univ…

No Dispute over Ownership of Benin Artefacts, Says Oba of Benin #benin #artefa…

No Dispute Over Ownership of Benin Artefacts, Says Oba of Benin …

No tussle over ownership of artifacts says Oba of Benin. …

No tussle over ownership of artefacts, says Oba of Benin …

No Dispute Over Ownership Of Benin Artefacts, Says Oba Of Benin via @Nigerialaw…

No dispute over stolen Benin artefacts – Oba of Benin – …

We’re doing sth peaceful they’re coming with war, instead of dialogue and action…

PDP Congratulates The Oba Of Benin On His Coronation Anniversary …

Benin people were living in Igodomigodo from 40 BCE, that’s 1,000 years before O…