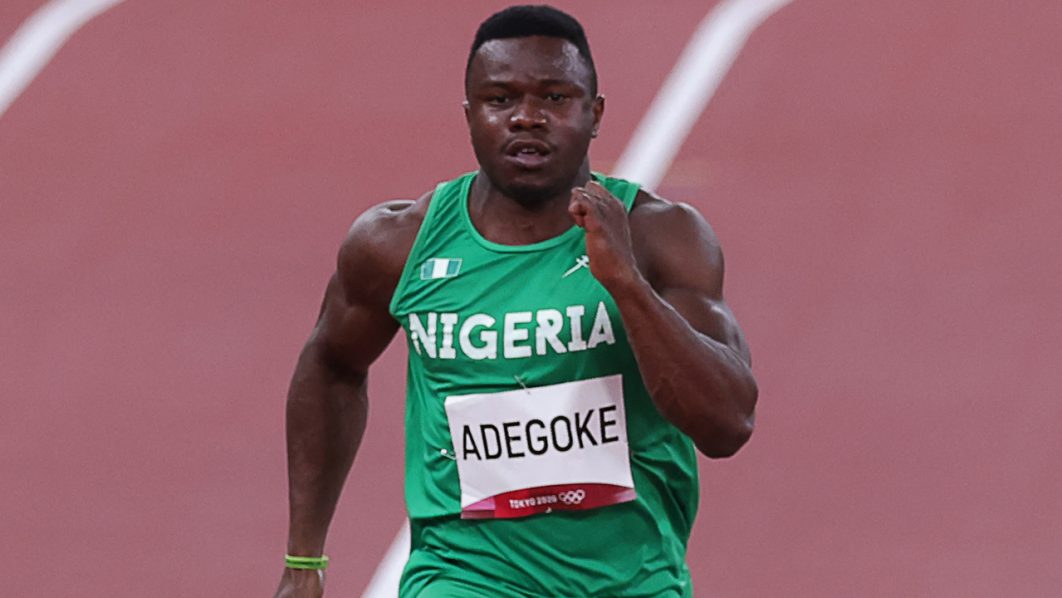 Nigeria’s Enoch Adegoke wins the men’s 100m heats during the Tokyo 2020 Olympic Games at the Olympic Stadium in Tokyo on July 31, 2021. (Photo by Giuseppe CACACE / AFP)

The Ministry of Youth and Sports Development has announced that it will take up and pay the medical bills of four track and field athletes, two of whom competed for Nigeria at the Tokyo 2020 Olympics with injuries, while the other two were injured during the Games.

The four athletes are Enoch Adegoke, who stopped 40 metres into the 100m final due to a hamstring trouble, and Ushoritse Itshekiri, who also pulled his hamstring in the semi-final of the blue ribband event.

Sunday Dare, the Youth and Sports Development Minister, made the disclosure and pledge during the reception for Team Nigeria hosted by Nigeria’s Ambassador to Japan on Thursday night in Tokyo.

“You have represented Nigeria well and made sacrifices. Nigeria will also take care of you in your time of need so that you can regain full health,” said Dare who superintendent over Nigeria’s best performance at the Games in 13 years.

The athletes are expected to make their submissions with necessary medical details to fast track the processing of the financial support.

Team Nigeria won two medals at the Tokyo Olympics, the most since 2008.

The team also recorded a number of firsts and encouraging performances.

Wrestler Blessing Oborududu won Nigeria’s first ever medal in the event, while Enekwechi became the first Nigerian, man or woman, to compete in the final of the shot put event.

As many as 49 out of the 60 athletes that donned Nigeria’s green and white colours made their debut at the Games with over 30 of the contingent under the age of 26.