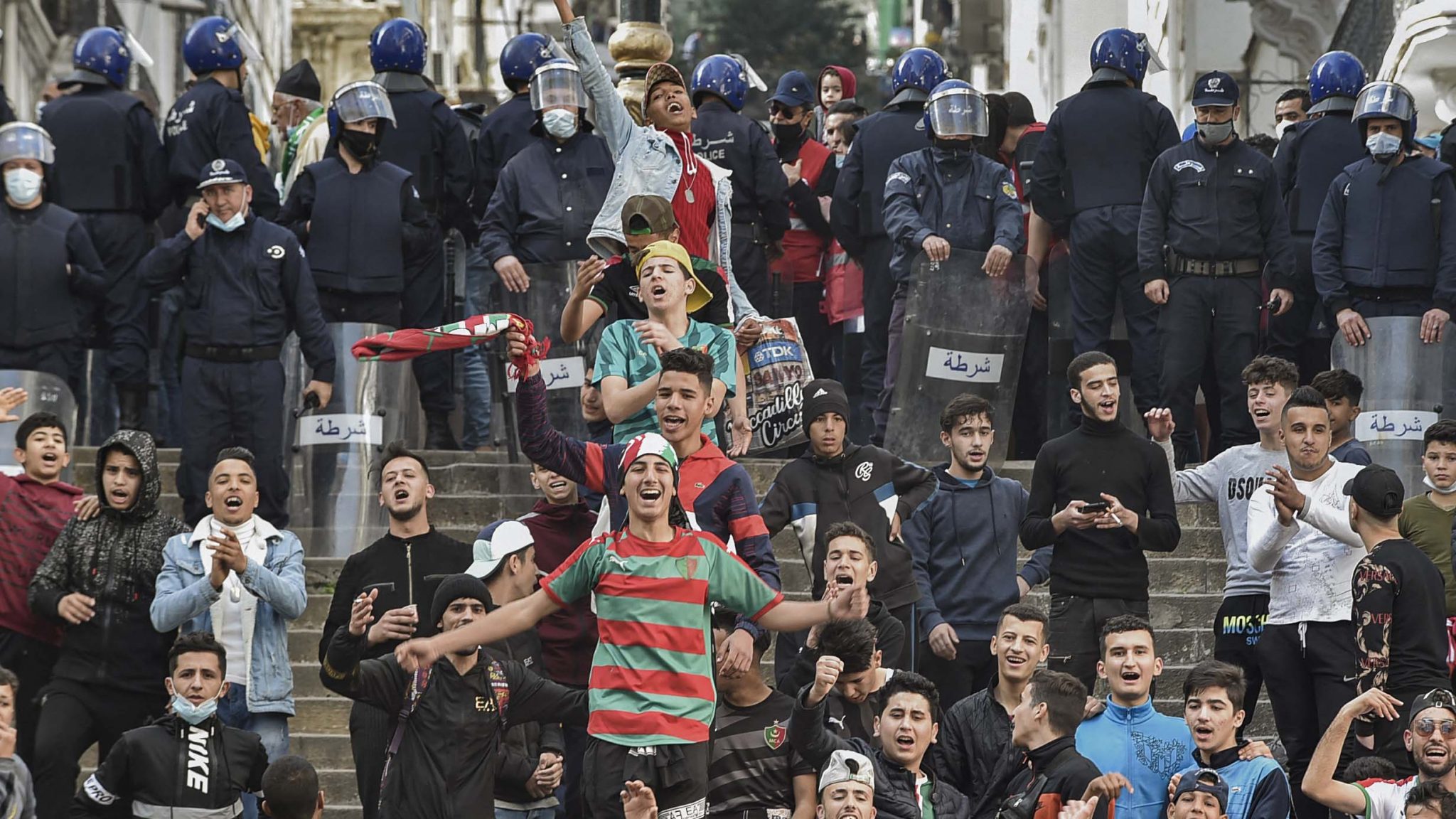 Algerian security forces stand guard as demonstrators take part in an anti-government protest in the capital Algiers on March 5, 2021. – Thousands of people demonstrated in Algiers and other cities across the country, confirming the remobilization of the Hirak protest movement again in the streets since the second anniversary of the uprising on February 22. (Photo by RYAD KRAMDI / AFP)

The pro-democracy movement, known locally as “Hirak”, first mobilised in February 2019 and within weeks forced then president Abdelaziz Bouteflika to abandon a bid for a fifth term and resign.

It called a halt to protests early last year as coronavirus restrictions took hold, but returned to the streets late last month to celebrate its second anniversary, protesting every Friday since.

“Hirak rallies will continue until this regime, which refuses to hear our voice, ceases to exist,” said Bilal, a 37-year-old civil servant who joined the protest in Algiers.

Several marches converged in the early afternoon in the capital, following Friday prayers and amid a heavy police presence, while a helicopter hovered overhead.

“I hope that my children and grandchildren get to live in a better Algeria than the one I have lived through,” said Khadidja, a protester in her seventies.

She said she had taken part in every rally since the first on February 22, 2019.

Demonstrators, who are demanding a sweeping overhaul of a ruling system in place since Algeria’s independence from France in 1962, chanted slogans calling for a “civilian state, not a military one”.

Lofti, a 27-year-old banker, said nothing had changed over the past two years “We have the same demands as on February 22, 2019.”

Protesters lashed out at the intelligence services, accusing them of being “terrorists”. Detainees have alleged they were tortured in custody.

President Abdelmadjid Tebboune, once a premier under Bouteflika and elected in a widely boycotted 2019 presidential poll, has reached out to the protest movement while seeking to neutralise it.

Protesters see the regime as little changed from the one led by his predecessor.

Meanwhile in Geneva, the United Nations’s rights office said Friday it was “very concerned about the deteriorating human rights situation in Algeria and the continued and increasing crackdown on members of the pro-democracy Hirak movement”.

The office had “reliable information” indicating that hundreds of people had been detained since street protests resumed on February 13, after months of being forced online because of the pandemic, spokesman Rupert Colville said.

Colville warned that the latest developments echoed the reaction to the demonstrations in 2019 and 2020, when at least 2,500 people were detained.

He said the rights office had received credible reports that some 1,000 people had been prosecuted for participating in the Hirak movement or for social media posts critical of the government.

“We have also received allegations of torture and ill-treatment in detention, including sexual violence,” he said.

The UN urged authorities in Algeria to free all those arbitrarily detained, stop using violence against peaceful protesters and cease arbitrary arrests, he added.

HumanProgress: If you could visit Benin City during its golden age in the 17th c…