After earlier suspending Guinea over the coup, the Economic Community of West African States (ECOWAS) on Thursday called on the junta to hold presidential and parliamentary elections within six months. 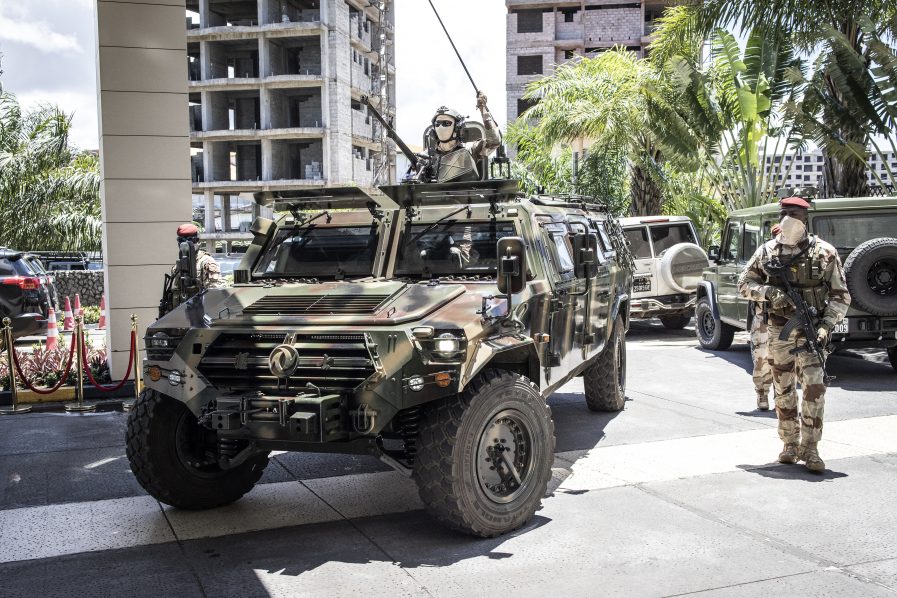 President of the National Committee for Rally and Development (CNRD) Colonel Mamady Doumbouya arrives with his team of Special Forces ahead of a meeting with high level representatives from the Economic Community of West African States (ECOWAS) in Conakry on September 17, 2021. – Colonel Mamady Doumbouya’s special forces on September 5, 2021 seized Alpha Conde in a Coup, the West African state’s 83-year-old president, a former champion of democracy accused of taking the path of authoritarianism. (Photo by JOHN WESSELS / AFP)

The 15-nation bloc also imposed a travel ban on junta members and froze their financial assets.

The Ghanaian and Ivorian presidents travelled to Conakry the next day where they met Guinea’s strongman in the city’s Sheraton hotel.

But the results of their meeting appeared inconclusive.

Akufo-Addo, whose country holds the rotating presidency of the organization, spoke of “a frank discussion with the head of the junta” at the airport before his departure.

Asked by reporters earlier whether Doumbouya had accepted the proposed six-month transition period, Akufo-Addo responded: “We are talking.”

Ghana’s president added that Doumbouya is awaiting the conclusions of his own internal consultation on restoring civilian rule. 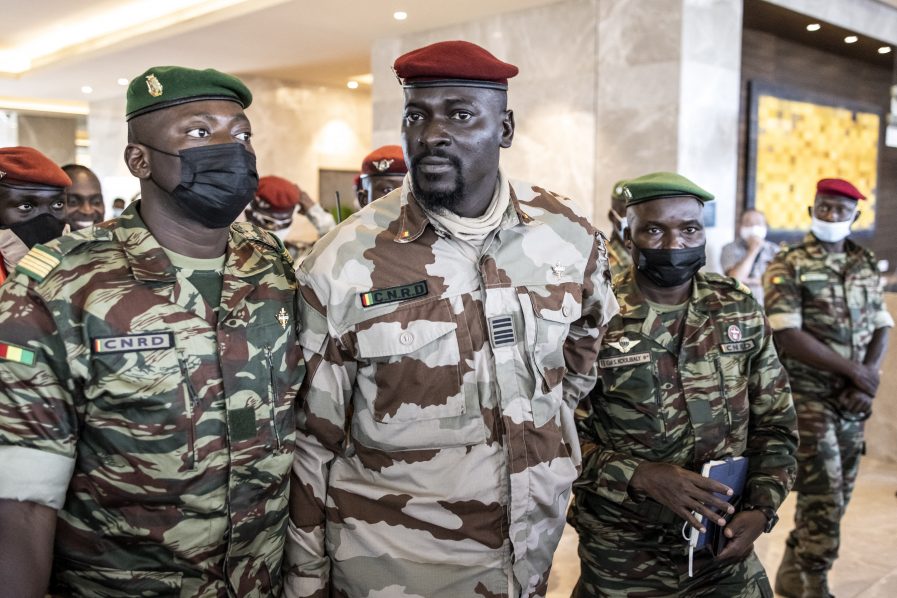 President of the National Committee for Rally and Development (CNRD) Colonel Mamady Doumbouya (C) leaves a meeting with high level representatives of the Economic Community of West African States (ECOWAS) in Conakry on September 17, 2021. – Colonel Mamady Doumbouya’s special forces on September 5, 2021 seized Alpha Conde in a Coup, the West African state’s 83-year-old president, a former champion of democracy accused of taking the path of authoritarianism. (Photo by JOHN WESSELS / AFP)

Ouattara, for his part, simply said the talks had gone “very well”.

“We met President Alpha Conde, he is well,” added Akufo-Addo.

“We leave with the hope that the new Guinean authorities have understood that it is necessary to act quickly and well. We are sticking to the release of Mr Conde,” he said.

The putsch has fuelled international concerns over democratic backsliding across west Africa and drawn parallels with Mali, which suffered two coups since August last year.

– Sanctions –
Doumbouya began a four-day series of talks on Tuesday designed to sound out the country’s political and civil society leaders on the path towards the civilian rule.

But he has so far refused to commit to a timetable.

“The only timetable that counts is that of the Guinean people who have suffered so much,” the former French legionnaire told political leaders in a closed-door meeting on Tuesday.

When faced with a similar coup in neighbouring Mali last year, ECOWAS imposed economic sanctions but lifted them after the military committed to restoring civilian rule within an agreed timeframe.

However, more than a year since the putsch in Mali, the army is still in power. There are also increasing doubts about a pledge to hold elections in February next year.

On Thursday, after the regional summit focused on Guinea, ECOWAS Commission President Jean Claude Kassi Brou insisted that the country’s transition must be “very short”.

Junta sanctions are designed to send a “strong signal to all those who are tempted to have this type of idea,” he added

– Captive Conde –
Public discontent in Guinea had been brewing for months before the coup over the leadership of Conde, 83.

A former opposition figure, Conde became Guinea’s first democratically elected president in 2010 and was re-elected in 2015.

But last year, he pushed through a controversial new constitution that allowed him to run for a third term in October 2020.

The move sparked mass demonstrations in which dozens of protesters were killed. Conde won the election but the political opposition maintained the poll was a sham.

The military is holding the former president, despite international calls for his release.

Akufo-Addo said on Thursday that he and Ouattara had been permitted to visit Conde that day.

Guinea’s junta has agreed to the principle of freeing the deposed president, but the issue remains sensitive.

Opposition groups are also opposed to releasing him, for example, citing the danger he might try to regain power.

A poor nation of 13 million people, Guinea has abundant deposits of iron, gold, diamonds and bauxite, the ore used to make aluminium. Mining is the driver of the economy.

It’s our season of Rest Every Promise from God to you will come to Pass, Surely…

Wait so Dave is from Edo state?…

In December 2020, following an application by the college under s.106 of the Cha…

Emir of kano oba of Benin …

It’s our season of Rest Every Promise from God to you will come to Pass, Surely…

Wait so Dave is from Edo state?…

In December 2020, following an application by the college under s.106 of the Cha…

Emir of kano oba of Benin …

Urhobo, Isoko and Edo speak fractions of the same ancient language. It would sh…

I was moving between States during the protests. Was stuck in benin for a long t…

Security guard and co-conspirators, land in police custody after kidnapping his …

A major drug dealer, Mike Omoarukhe, his manager and three other workers in his …

How is InI Edo not from Edo State …

In the name of opposing slavery, Jesus College is returning this artifact to the…

There are currently about 5 paramedic training and education schools in Nigeria….

Benin Bronze to be returned “His Royal Majesty, Oba of Benin, Omo N’Oba N’Edo U…

Should stolen art be repatriated? Yes. “We are indeed very pleased and commend J…

Edo warrior …. The spirit is real ! #TheChampsWay Benin people and Oba of Beni…

Anambra polls: Are we likely to witness a similar scenario that happened in Edo …

Welcome to the official account of @Blueprintushers , Edo state’s number one eve…