Erdogan made his announcement, just an hour after the court ruling was revealed, despite international warnings not to change the status of the nearly 1,500-year-old monument, revered by Christians and Muslims alike.

“The decision was taken to hand over the management of the Ayasofya Mosque … to the Religious Affairs Directorate and open it for worship,” the decision signed by Erdogan said.

The UNESCO World Heritage Site in Istanbul, a magnet for tourists worldwide, was first constructed as a cathedral in the Christian Byzantine Empire but was converted into a mosque after the Ottoman conquest of Constantinople in 1453. 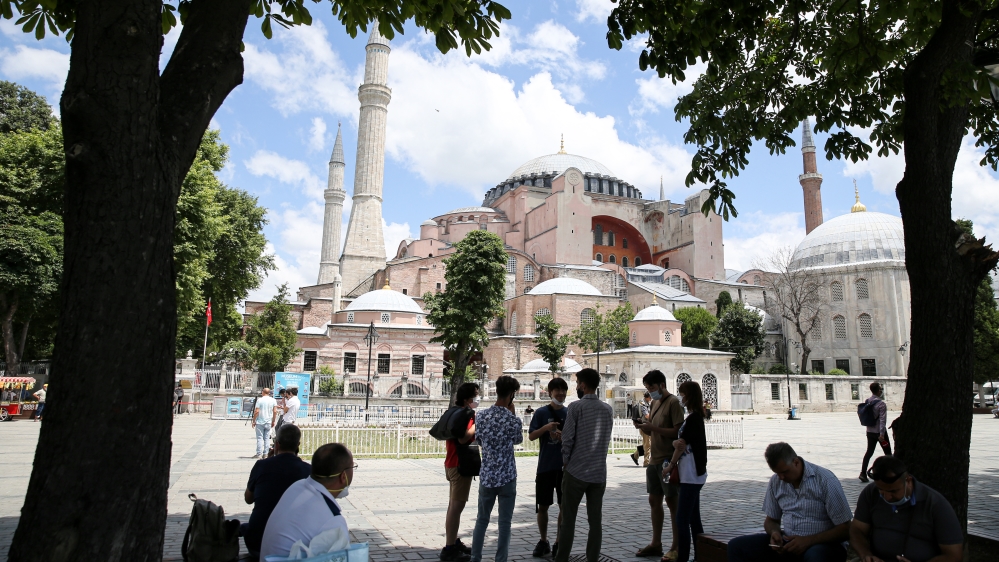 The court decision was followed quickly by Erdogan saying that the UNESCO World Heritage Site in Istanbul would be reopened for Muslim worship.

The Council of State, Turkey’s highest administrative court, unanimously cancelled a 1934 cabinet decision and said Hagia Sophia was registered as a mosque in its property deeds.

The United States, Greece and church leaders were among those to express concern about changing the status of the huge sixth-century building, converted into a museum in the early days of the modern secular Turkish state under Mustafa Kemal Ataturk.

Below is a round-up of international reaction to Friday’s decisions.

The Russian Orthodox Church expressed dismay at Turkey’s decision to revoke the museum status of Hagia Sophia, accusing it of ignoring voices of millions of Christians.

“The concern of millions of Christians has not been heard,” Russian Orthodox Church spokesman Vladimir Legoida said in comments carried by the Russian news agency Interfax.

“Today’s court ruling shows that all calls for the need for extreme delicacy in this matter were ignored,” Legoida said.

The Russian Orthodox Church previously urged caution over calls to alter the status of the historic former cathedral, and Russian Patriarch Kirill said he was “deeply concerned” about such a potential move and called it a “threat to the whole of Christian civilisation”.

Previously, Ecumenical Patriarch Bartholomew, the spiritual head of some 300 million Orthodox Christians worldwide and based in Istanbul, said converting it into a mosque would disappoint Christians and would “fracture” East and West.

UNESCO said its World Heritage Committee would review Hagia Sophia’s status, saying it was “regrettable that the Turkish decision was not the subject of dialog nor notification beforehand”.

“UNESCO calls on the Turkish authorities to open a dialog without delay in order to avoid a step back from the universal value of this exceptional heritage whose preservation will be reviewed by the World Heritage Committee in its next session,” the United Nation’s cultural body said in a statement.

“The ruling by the Turkish Council of State to overturn one of modern Turkey’s landmark decisions and President Erdogan’s decision to place the monument under the management of the Religious Affairs Presidency is regrettable,” he said in a statement.

Cypriot Foreign Minister Nikos Christodoulides, a Greek Cypriot, posted on his official Twitter account that Cyprus “strongly condemns Turkey’s actions on Hagia Sophia in its effort to distract domestic opinion and calls on Turkey to respect its international obligations”.

“We are disappointed by the decision by the government of Turkey to change the status of the Hagia Sophia,” Morgan Ortagus, State Department spokesperson, said in a statement.

“We understand the Turkish Government remains committed to maintaining access to the Hagia Sophia for all visitors, and look forward to hearing its plans for continued stewardship of the Hagia Sophia to ensure it remains accessible without impediment for all.”

“The nationalism displayed by Erdogan … takes his country back six centuries,” Culture Minister Lina Mendoni said in a statement.

Mendoni further said the court ruling “absolutely confirms that there is no independent justice” in Turkey.

Vladimir Dzhabarov, deputy head of the foreign affairs committee in the Russian upper house of parliament, called the action “a mistake”.

“Turning it into a mosque will not do anything for the Muslim world. It does not bring nations together, but on the contrary brings them into collision,” he said.

Palestinian group Hamas has welcomed the verdict allowing the opening of Hagia Sophia as a mosque.

“Opening of Hagia Sophia to prayer is a proud moment for all Muslims,” said Rafat Murra, head of international press office of Hamas, in a written statement, quoted by Turkey’s Anadolu Agency.

The naming ceremony of the son of popular actress, Regina Daniels and her billio…

I can travel to Lagos, just that I’ll trek back to Edo state …

I can travel to Lagos, just that I’ll trek back to Edo state …

ICYMI: “All hands should be on deck to work for Edo State and Edo people everywh…

Oba of Benin urges PDP to eliminate godfatherism from its ranks …

No godfathers for Obaseki, Oba of Benin tells PDP – …

“How many Yoruba traditional rulers can do what Oba of Benin Did?” @jimidisu Me…

So few years ago (2014) in Benin city, I entered a bus from ugbowor going to rin…

Those Edo state, state assembly members that want to come back may plan in futur…